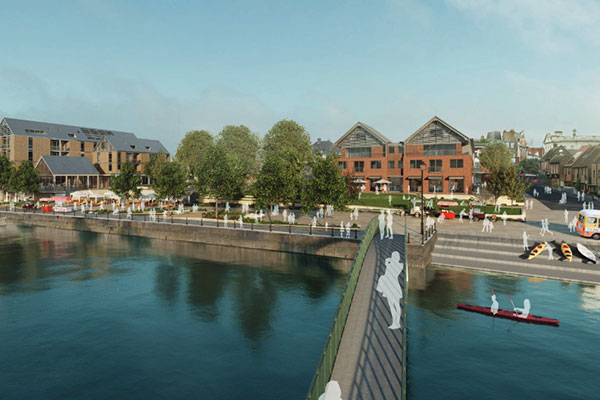 A Planning Application has now been submitted proposing an exciting new development on Twickenham Riverside - one that hopes to end forty years of uncertainty and address the run-down buildings currently on the site.

Over the past eighteen months, Hopkins Architects and their team, with help from the Council, have been working hard to develop the design for the Twickenham Riverside site. This follows a design competition held in 2019. Following a consultation earlier this year on the proposals, more than half of those who participated felt that they would be more likely to visit the Riverside if the plans were delivered.

Responding to the constructive feedback during the consultation, a number of changes have been made to the proposals. These include; an improved event space; refining the open space and re-provided Diamond Jubilee Gardens, including increased green space where possible; finessing the vehicular, pedestrian and cyclist movements on the site; including public toilets on the ground floor of the new Wharf Lane building; and further work on a river activity zone.

As part of the Planning process, a statutory consultation will be carried out. It is expected to go to Planning Committee later in the year.

“These proposals present such an opportunity for Twickenham and they deliver what residents have been asking for decades; a beautiful riverside park right in the heart of Twickenham. Hopkins have done a first-rate job in working around the site’s constraints, not least the issue of flooding, and have created a truly exceptional design which will really showcase the local area and become a magnet for residents and visitors alike.

“I’ve been so pleased to see how local residents, businesses and groups have got involved through the engagements process and the design is very much a product of their involvement. We finally have a design of which we can all be proud and I hope everyone is as excited as I am to see construction start on site.”

Previous Events at the Museum of Richmond Next Council to compensate for garden waste service disruption
var smartquotes = require('smartquotes'); // smartquotes();