Almost exactly seventy years ago, at the end of April 1945, an unusual activity was taking place on Bomber Command airfields across England. Although the war in Europe had only 10 more days left to run, the ground crews and armourers were as busy as ever but instead of loading their aircraft with bombs they were filling the bomb bays with sacks of food.

Between 29th April and 8th May 1945 the Royal Air Force, the Royal Canadian Air Force and the United States Army Air Forces were to drop over 11,000 tons of food into those parts of the Netherlands still occupied by German forces, to help save the civilian population from starvation. It was a period in Dutch history remembered as the ‘Hongerwinter’ (Hunger winter).

Food was already in short supply and following the allied invasion of Europe in June 1944 it had become even scarcer. When ‘Operation Market Garden’, the Allied attempt to speed up the liberation of the north Netherlands, ground to a halt at Arnhem in September 1944 the Dutch government-in-exile asked railway workers in Holland to stage a rail strike to help allied efforts. In retaliation the Nazi administration placed an embargo on all food transports into those areas still in their control.

Although the embargo was partially lifted in November allowing food to be brought in by water the unusually harsh winter had already frozen the canals making them impassable. Over 4.5 million people began to starve. There was no butter. By April 1945 the bread ration had fallen from 2,200 grams a week to 400 grams. The potato ration was reduced to 1 kilo a week and the meat ration - zero. So bad was the food situation that even the black market - usually able to come up with something even in the direst of circumstances - was exhausted. Then the gas and electricity supplies were turned off. The Dutch were not only starving. They were beginning to freeze to death…

“I queued for hours to get some salted endive or some beans. Always that hunger… And then there was less and less. There remained nothing, not even in the black market. Sugar beets from which we first made syrup and then some kind of cookies from the leftovers. Impossible to eat, but it kept many people alive. Fried tulip bulbs were the last resort.”

Recognising the desperate situation in his country Prince Bernhard appealed directly to Allied Supreme Commander Dwight D. Eisenhower for food to be dropped. Early in April 1945, and working through agents, negotiations were started with Reichskommissar for the Occupied Netherlands, Arthur Seyss-Inquart. Permission to drop food was granted on the basis that ‘participating airplanes would not be fired upon within specified air corridors’. 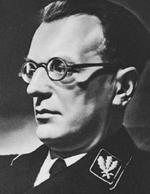 The first flight was made on the morning of Sunday 29th April by RAF Lancaster “Bad Penny”. To avoid damaging the food - spam, corned beef, potatoes, flour and dried vegetables packed in stout paper sacks and dropped without parachutes - the plane had to fly as low as 15 metres. Later that day, following the successful return of “Bad Penny” to the UK, the full weight of Operation Manna swung into action, starting with a BBC broadcast to Holland…

“Bombers of the Royal Air Force have just taken off from their bases in England to drop food supplies to the Dutch population in enemy-occupied territory.”

A 17 year old student, Arie de Jong, recorded the event in her diary.. 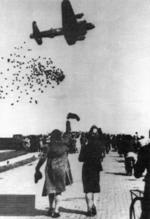 “There are no words to describe the emotions experienced on that Sunday afternoon. More than 300 four-engined Lancasters, flying exceptionally low, suddenly filled the western horizon… One could see the gunners waving in their turrets. A marvellous sight. One Lancaster roared over the town at 70 feet. I saw the aircraft tacking between church steeples and drop its bags in the South. Everywhere we looked, bombers could be seen. No one remained inside and everybody dared to wave cloths and flags. What a feast! Everyone is excited with joy. The war must be over soon now.”

For many of the aircrew who took part in ‘Operation Manna’ it was a redemption. After months of normal operations, facing fighter and flak to bomb already devastated cities, this was a chance to do something clearly beneficial. Ken Wood, a rear gunner, remembered… “People were everywhere - on the streets, on the roofs, leaning out of windows. They all had something to wave with; a handkerchief, a sheet - it was incredible.” Flight Sergeant Gibson, another crew member wrote “I will always remember seeing ‘Thank you Tommy’ written on one of the roofs… it was as if we brought the liberation closer to reality.”

A total of 3,100 flights were made by Bomber Command, and an additional 2,200 by the American Air Force which began dropping food on May 1st as ‘Operation Chowhound’. Operations Manna and Chowhound ended when Germany surrendered on May 8th. Although over 11,000 tons of food were dropped in the ten days of the joint operation, some 18,000 Dutch people died of starvation. Three aircraft were lost, two in a collision and one due to an engine fire. The people of the Netherlands still remember the ‘Hongerwinter’ to this day.

NOTE: Some images taken in Holland during the ‘Hongerwinter’ assembled by Lynn Hutchinson.